The 2012 NCFFA Association Hall of States booth at National Convention was designed, constructed, and hosted by Crossroads Christian School FFA of Statesville.  This year's booth featured a walk-through "tour" of NC, with visitors beginning at the beach and treated to a freshly caught token (goldfish crackers) of our fishing industry. They were then told about the products of the Coastal Plain, including nationally ranked #1 sweet potatoes and tobacco, and #2 in hogs and pigs.  Stepping up a level in elevation, students learned about the many products of the Piedmont, including the dairies of our home county, Iredell Co., which ranks first in the state, and sampled chocolate milk (Food Lion product) that is supplied by a major co-op in Iredell.  A model turkey reminded visitors we also rank 2nd nationally in turkeys.  Finally, one last climb up to the mountains of NC led visitors to a treat of a fresh and fragrant mixture of Christmas Tree Potpourri made by the chapter.  There they learned NC is 2nd in Christmas trees, and 7th in the rapidly rising apple industry. While the booth fell in 2nd place, just 3 points behind winning Alabama, their advisor is most proud of the perfect score her students were graded on "member presentation and involvement!" 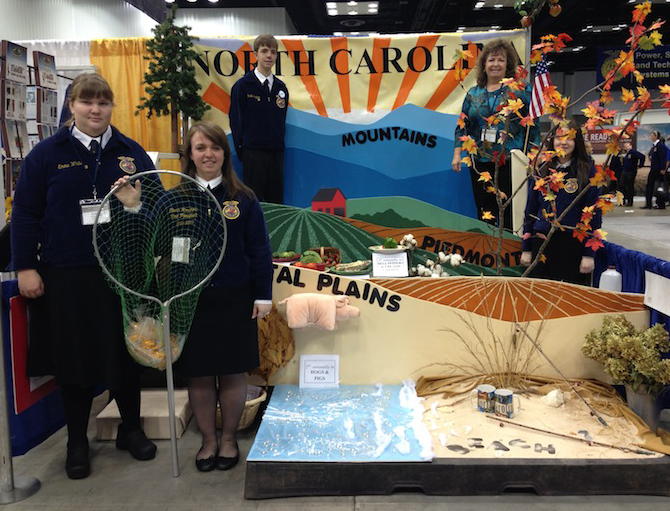