History of the NC FFA Center 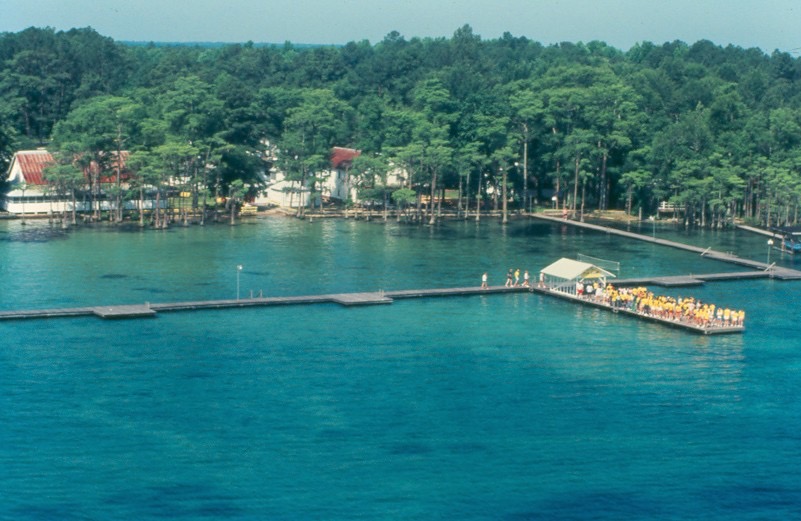 Immediately following the passage of the Smith-Hughes Act in 1917 and the establishment of departments of vocational agriculture in rural high schools, teachers and students began planning for educational tours and camping trips. Since no camping facilities were available, groups planned trips for visiting educational and recreational centers such as Experiment Stations, National Parks, etc. Planning their programs more or less on a day to day basis, they spent most of their time observing and listening to an explanation of various types of experimental projects, hiking, fishing, etc. The nights were spent sleeping on concrete floors, in apple barns, haylofts or wherever a convenient place could be located free or cheap. Many vocational agriculture teachers in the twenties found camping, in spite of the lack of a central place for eating and sleeping, one of their most valuable activities with the boys.

Realizing the tremendous interest in camping and the shortage of good facilities, early in 1926 the supervisory staff members, working under the wise and capable leadership of the State Director of Vocational Education, Mr. T. E. Browne and the State Superintendent of Public Instruction, Dr. Clyde A. Erwin, accepted the challenge of securing and operating camps for all students of vocational agriculture as one of their major goals and plans were immediately developed for doing so.

The original campsite at White Lake was leased to the Young Tar Heel Farmers Association (YTHF) by the Pharr and Adkerson Real Estate Company of Charlotte in 1927. This company also loaned the YTHF $7,395 for the construction of buildings and various other improvements. The first year of camping was 1928. This site was on the west side of NC Highway 53, across the road from the current camp location. It was known as the YTHF Camp until 1930 when it became the White Lake FFA Camp. This name was retained until 1966 when it was re-named the R.J. Peeler FFA Camp in his honor. In 1993 the name was changed to the North Carolina FFA Center. 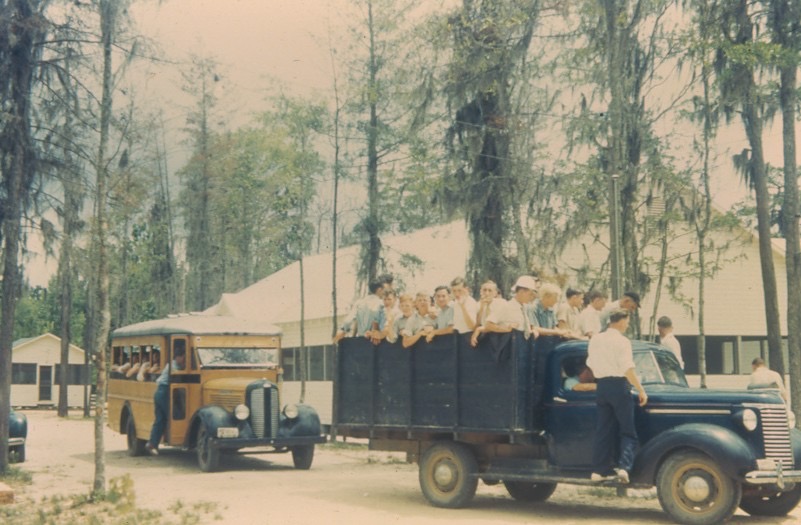 All of the borrowed money was paid back in 1933 from camp receipts at the rate of $2 per member in attendance plus $10 donations from 80 teachers of vocational agriculture and staff members.

From 1933 to 1938, approximately $12,000 was accumulated from the $2 fee per member in excess of actural expenses. This $12,000 was used to purchase a five acre plot of land on the lake front for $3,550 and the remainder was used to pay part of a $25,000 Works Progress Administration (WPA) project. The land was purchased in the name of the State Board of Education. Subsequently deeds were changed to the North Carolina Future Farmers of America Association (FFA).

By 1937, FFA membership had increased to over 12,000 and it was nesessary to open another camp to accommodate all who desired to attend. FFA officials, working in close cooperation with Dr. Clyde A. Erwin, State Superintendent of Public Instruction, located an ideal site 22 miles northeast of Asheville near Barnardsville which was formerly operated as a Civilian Conservation Camp (CCC). The buildings were owned by the U.S. Forestry Service and the land was owned by the Dillingham family. The forestry officials agreed to turn over their interest in the buildings if FFA could arrange to lease or buy the 181/2 acres of land. The FFA leased the land for $100 annually with an option to purchase within two years. The Tom Browne FFA Camp became a reality.

The land was purchased October 1, 1940 for $4,650 and was paid for by gifts and loans from various FFA chapters on the basis of 50 cents per member, by loans made to the FFA Association by teachers of vocational agriculture who serve as local FFA advisors and by staff members. The deed to this property was registered in the name of the State Department of Public Instruction and later transferred to the North Carolina FFA Association.

Following the purchase of this camp, arrangements were made for starting a $20,000 WPA project, $11,000 of which was to be provided by the FFA Association. Needing additional cash, a request was made to FFA members and local advisors asking that they loan the FFA Association the amount necessary to complete this project with the understanding that fees for camp attendance would be made high enough to accumulate sufficient funds for redeeming all of these loans by November 1, 1942. This agreement was carried out 100 percent.

In 1928, in North Carolina the Future North State Farmers was organized for black students enrolled in vocational agriculture courses. Other states had similar organizations using different names. In 1935, the first national meeting of these groups was held and the New Farmers of America (NFA) was formed.

These students began to participate in weekend camping at the Pitt County Training School in Grimesland. In 1932, a full-fledged camping program was organized at Kittrell College in Vance County. These early experiences led to the leasing in 1953 of a 27 acre site, from the Hammocks Beach Corporation, located on Queens Creek near Swansboro in Onslow County. Under the capable leadership of Mr. S.B. Simmons, Mr. W.T. Johnson, members of the North Carolina Agriculture Teachers Association and others, buildings and facilities were designed and constructed and the camp went into full scale operation as the S.B. Simmons NFA Camp with official dedication ceremonies in 1958.

Following the merger of the NFA and FFA in 1965, the lease on the Simmons Camp was renegotiated in 1966 in keeping with the merger of the two organizations. The lease was in effect until 2016 and renewable at that time. 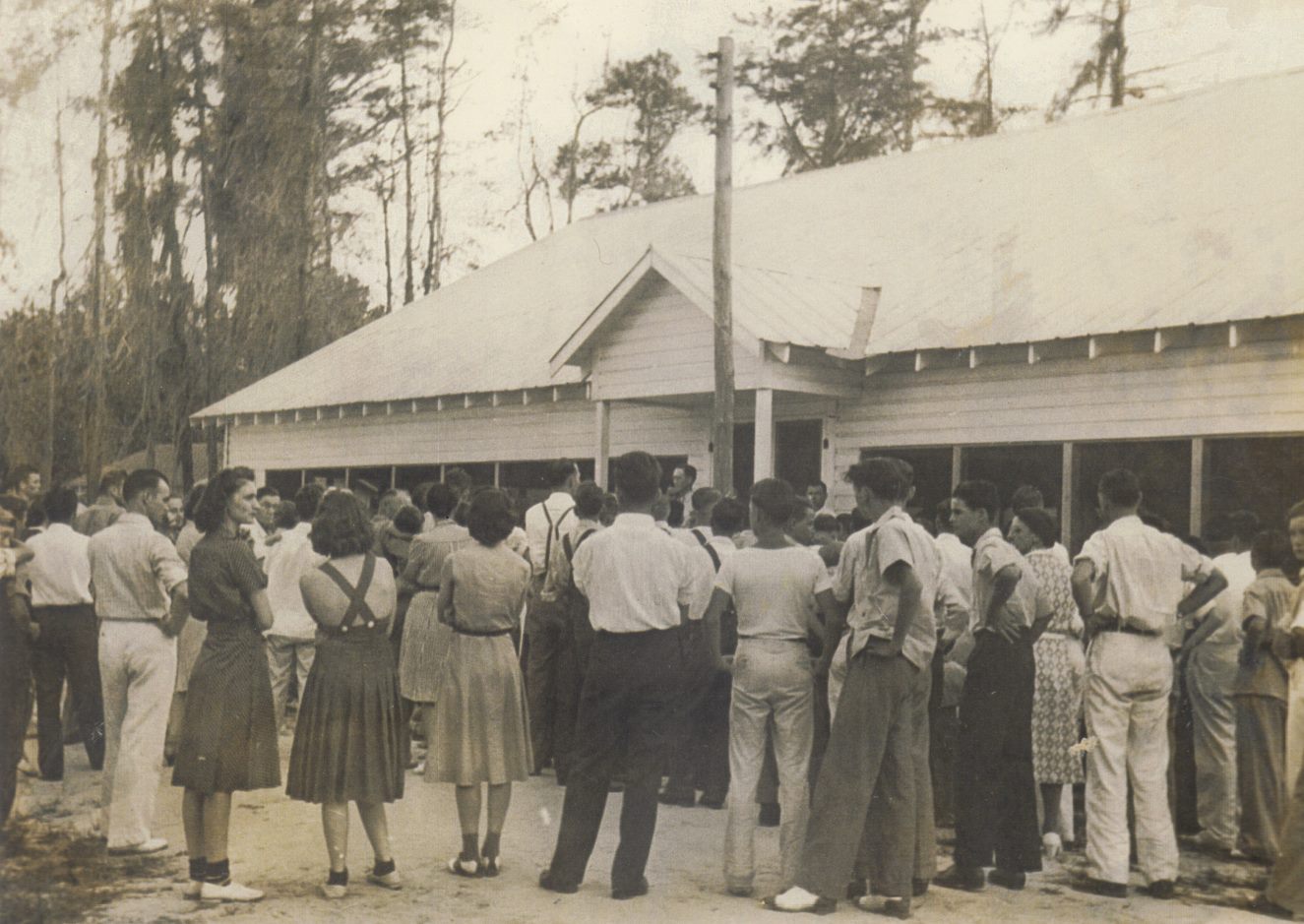 Beginning in 1966, all three FFA camps (R.J. Peeler, S. B. Simmons and Tom Browne) were operated under a uniform set of rules, regulations and policies.

During the early years of the camping program. it was the practice to charge all members attending camp about $2 beyond the actual amount required for camp operation. The FFA members and advisors always agreed to this policy, knowing that all of this money was being used to improve their camps.

During World War ll, the camps were closed for two years and the White Lake Camp was leased to the Army free of charge. During this period, Mr. T.E. Browne, then serving as State Director of Vocational Education, asked the State Legislature for an appropriation of $6,000 for the upkeep of these camps since the FFA had no income during this period. The $6,000 was approved and used for this purpose.

In the 1970's, participation in the Tom Browne and S. B. Simmons camps declined and this, along with other factors, led to the closing of these two camps. In 1979 the Tom Browne Camp was sold to Buncombe County. In 1991, The FFA transferred its lease and assets in the S. B. Simmons Camp to the North Carolina Association of Vocational Educators and other Professional Workers. Since 1991, only the FFA Camp at White Lake has been in operation.

Proceeds from the sale of Tom Browne Camp were used to construct a dorm and bath facility for female campers in 1981.
Other major construction in the early 80's included twelve new cabins and a bath house for male campers. The FFA Alumni Building was completed in 1992. In 1994, the Lodge was officially opened. The staff house was renovated and became known as the Kirkland Cottage in honor of J. Bryant Kirkland (former Dean of the School of Education at N. C. State College) who made a significant financial contribution to the FFA Camp. In 2008, the new Dining Hall was opened as well as the Recreation Shelter. Dedication ceremonies were held in June 2008.

The supervision of FFA camps from the beginning has been one of the major responsibilities of the State FFA Board of Directors. Duties and responsibilities of the Board in this area are: formulation of general policies relative to camp operation, the employment of camp managers and staff, and keeping all camp activities in line with the high ideals and purposes of the FFA. The Board normally meets twice each year. The administration of the three camps was for some time assumed by two members of the State Agricultural Education Consultant Staff.

The camping program consists largely of wholesome recreational activities. The sports program, which is competitive on a chapter basis, including swimming and water sports, basketball, softball, volleyball, water ball, horseshoes, shuffleboard, checkers and table tennis. Chapters complete in a talent show, devotional, flag raising ceremony and calisthenics are held early each morning and a vespers program is held each evening. Many of these programs are planned and presented by chapter groups.

Through 2008, more than 400,000 students (YTHF, NFA and FFA members) have participated in these camping programs.